Pictured at home in Sawtell 1990 with the most popular regulator of the late 1950’s – the double hose Aqua Lung (trade mark) regulator – quieter and easier to breathe from. Terrific for photographers as the exhaled air did not rumble passed ears and eyes.

The big speargun.  Wally at a Palm Beach, Sydney competition in 1972

Wally picture by Jeff Carter.  Stunning image from the 1950s.

The Chesty Bond trophy for largest fish, (1950s).  Chesty Bond was a comic strip hero character in a newspaper. 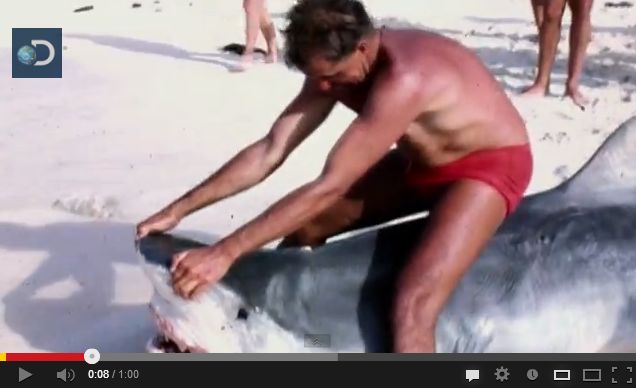 Wally was the Host Diver during more than one diver’s convention at Heron Island. He’d take his own five meter boat from Sydney to Gladstone by trailer then motor it out to the island.

Wally Gibbins had his boat at Heron Island (1963)  Ron Taylor’s Skindiving Paradise – made and later sold to  the Queensland Government Tourist Bureau – recorded during the November divers rally over two or more years.

The short documentary is the first color film by Ron Taylor.

When the island kitchen required seafood one morning they asked Wally to “spear them a few fish”.

In his typical manner, Wally (with mate Warner Power)  went to work with their guns, over-reacting with far too many fish for a bit of humor.

A possible victim of Severe Depression Virus was the late Jacques Mayol who made a personal serious decision to leave this world on Dec 23, 2001 in Italy.

The cult movie The Big Blue (1988) was based on the free diving skills and rivalry between Jacques Mayol and his mate Enzo Maiorca.

Jacques was born in Shanghai to French parents. An exciting time for his conception. The city is described then as: Whore of the orient, Paris of the east, city of quick riches, ill-gotten gains and fortunes lost on the tumble of dice; the domain of adventurers, gamblers, swindlers, drug runners, idle rich, dandies, tycoons, missionaries, gangsters and back street pimps – Shanghai 1927″. Lonely Planet CHINA.

Jacques Mayol learned to freedive in Japan at age 15. His inspiration to become a world record breath-holding free diver was sparked while watching semi-nude women descend 75 feet without flippers (aka fins) to collect pearl shell oysters.

Later his father was to die in a diving accident.  (No details available easily).

At the age of 56 years, Jacques Mayol set a world free diving depth record of 105 meters,  less than 20 years later he chose to end his own life with a rope.  The depression virus (if such a virus does exist) is a powerful adversary.

UPDATE JAN.7 2005. Only a brief but ‘scary’ stay in hospital. A burst blood vessel and great loss of blood. Back to normal as of this moment.

What defined a good diver in the early days was the ability to invent, design and improve equipment. To be a good diver it was advantageous to be also skilled with a lathe and other things. Most equipment was home-made from the 1950’s to 1970 and we all relied on friends for help or guidance or both.

Footnote: Wal Gibbins worked in Ben Cropp’s underwater documentaries around Australia, PNG and the Solomon Islands for two years full-time. They share the same birthday, January 19th with a six-year age differences. Wally in 1930, Ben in 1936. 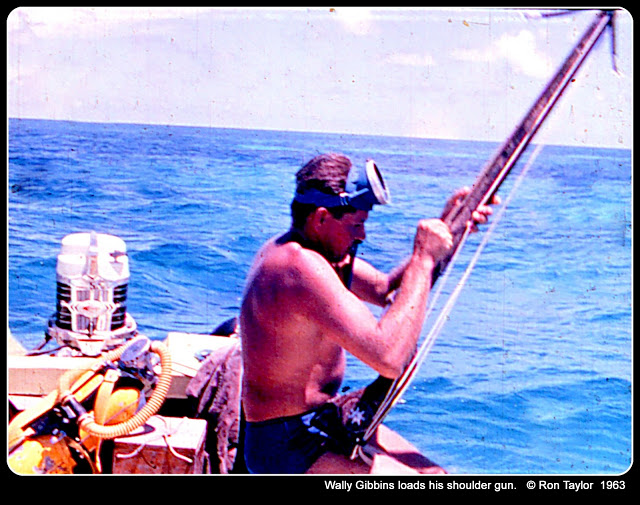 Freediving above the Birchgrove Park shipwreck (160 feet to the sand).