WHAT IS CHAIN MAIL ARMOUR wikipedia 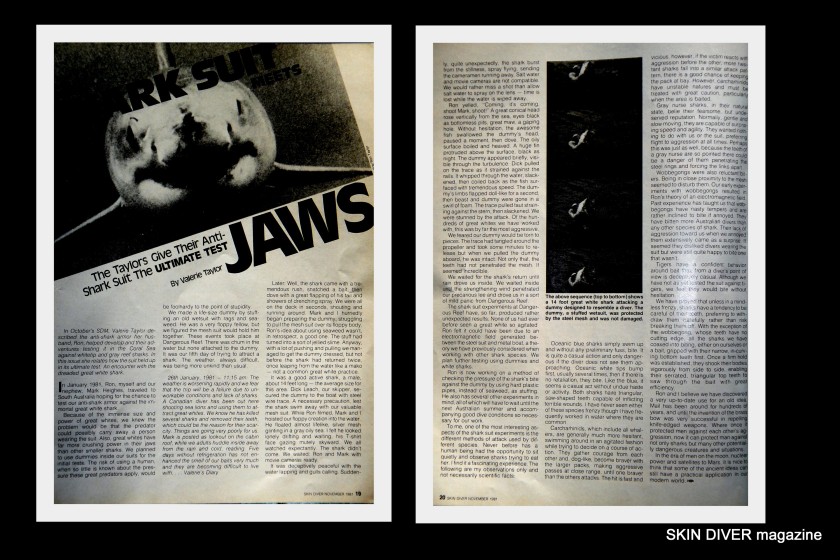 Valerie Taylor reports on their first tests of the steel anti-shark dive suit, with their  encouraging a shark bite on a replica diver in South Australia.

This stunt upset local divers at the time who claimed it may be training sharks to bite human forms.

Even more scary for pro abalone divers today might be the observation on how the steel suit had one test shark very agitated due to possible electrical fields generated, since the original steel suit was purchased by several divers.

As reported in the USA large circulation diving magazine. 1981.

We three rented a cabin where, at high tide, the sea water was under the floor. That cabin and many others have since disappeared as the western coast of this big sandy island slowly washes away.

The Australian mainland is seen in the distance, across Moreton Bay. To the south out of sight is The Gold Coast – in the opposite direction is Queensland’s capital city, Brisbane.

Two years ago bull shark(s) attacked and killed a swimmer just 50 meters from where Mike is standing.

Our shark diving was around the corner and offshore at a small rocky island 3km from the holiday village of Point Lookout.

Today fishing pressure has reduced the chance of easily sighting any shark (other than the seasonal and migratory Grey Nurse).

Occasional large tiger sharks are a possibility, attracted by lots of stingrays and a few manta rays – both natural food. 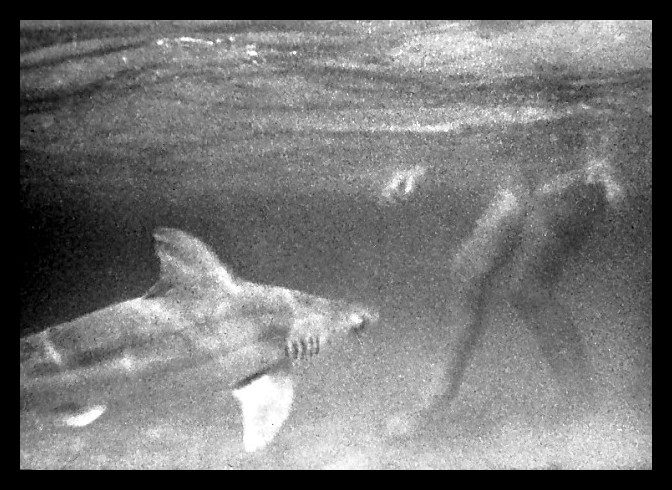 Small shark near a pair of legs (fake picture) frightened  many regular  swimmers at a Sydney Harbour beach when published in a tabloid evening newspaper and may have been a trigger for the erection of a shark-proof swimming enclosure – which would have been a good idea.

The small shark was recently born and presented absolutely no danger.  Not a scene from Savage Shadows but from that era of film making in the 1960’s.

(Bottom left) Sydney tabloid newspaper Telegraph regularly features marine stories. Tues 25 June was a 2.47 meter male bull shark tagged and released at Manly that entered Sydney Harbor (Port Jackson) and apparently became ‘lost’, moving throughout the harbor.
1. Bulk of the sharks time was spent west of Sydney Harbour bridge.
2. On a single day it traveled 55 km.
3. During 14 days it traveled 295 km with three days unaccounted for.
4. 230km was traveled during darkness hours.
5. Another 55 sharks have been tagged for tracking by Dept.of Primary Industries. Sydney harbor was a priority after recent near-fatal attack on a navy diver.
6.There are 38 listening ‘posts’ in Sydney harbor with another 200 along the coast to track the tagged sharks.

There was a fatal shark attack at Balmoral in the early 1960’s on a spear fisherman.