Divers, John M Harding (senior) and Roy Bisson (on right)
This was the longest voyage undertaken by the famous charter boat in 1971. Newly launched the boat was 79′ in length and had accommodation for 16 divers (later reduced to 12), plus a crew of four.

The lure for such a voyage was shell collecting, a search for the rare volute thatcheri. Half the charter cost was paid by shell collectors. I was sponsored by a tabloid newspaper to write and photograph five stories that could be serialized over one week.

Text written especially for divers would be published in Fathom No.6 issue. Art director and diver, Roy Bisson being on the voyage.

From San Francisco the late Dewey Bergman (Sea and Sea Travel) was scouting on this voyage for what would become regular parties of American divers and underwater cameramen. The world was about to discover diving Australian style. The future voyages would not involve so much traveling time.

Marion Reef was the new inshore destination, still in The Coral Sea and today almost unvisited due to fuel cost considerations.

The Chesterfield Reef trip was our most memorable. Near perfect weather and a good crew of professional divers. For further information, including names of shipwrecks at Chesterfield Reef, see Wikipedia.org

Roy Bisson swim fins (flippers) were filmed simultaneously by my movie camera and another by Richard Ibara. This was Chesterfield Reef at it’s best.  Grey Reef sharks were territorial with these displays as they probably had not encountered divers before. 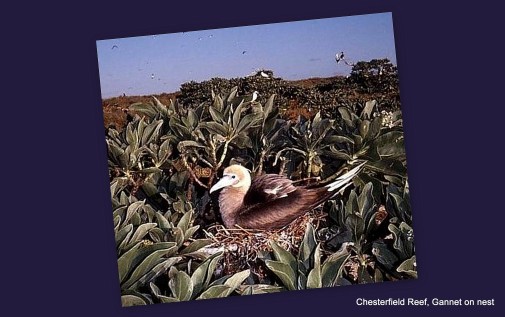 **Christine Danaher and I found these volutes**

**Captain Wally Muller** had staked out a location well away from the charter boat where he’d look for shells. To his amazement (and probably disgust) the prize shells were to be found directly where the charter boat was, underneath and in shallow water, and by Christine.

Each shell is worth $300 or more, depending upon size and perfection.