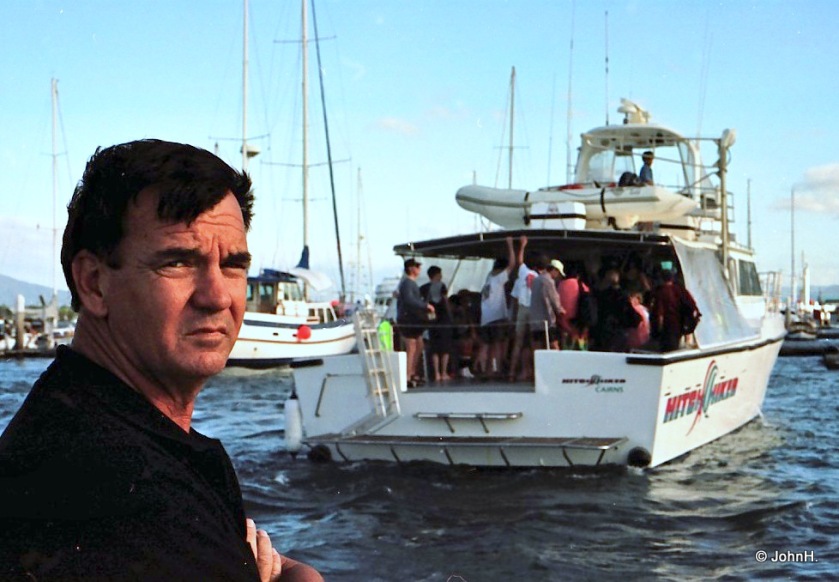 Alby and Irene  Zeibell became the second owners of the famed charter vessel Coralita when purchased from  Captain Wally Muller.Base of operations for Barrier Reef Cruises was moved from Yeppoon  to Cairns in north Queensland where there was an international airport.  Coralita had a ‘Commonwealth survey’ registration which enabled charters anywhere in the world.  Yjis was unique with Queensland  charter boats at the time.

Alby was a former Tasmanian abalone diver who excelled at most things he set his mind to. He began exploring The Coral Sea aboard his new vessel and soon turned it into the best international scuba live-aboard boat, catering to advanced divers. Alby was able to concentrate  time on underwater photography and was soon achieving the top quality professional results from macro to very wide-angle. Unique subject matter included the first ‘schooling hammerhead sharks’ at Osprey Reef in The Coral Sea (not a part of the Great Barrier Reef).

Coralita was not so fortunate. The first mishap occurred when a giant US warship accidentally ‘squashed’ the tied-up vessel against Cairns wharf, while attempting a difficult turn in a current.

After months of repairs Coralita later caught fire from smouldering electrical wiring in the galley on her first dive charter.  Worse was yet to come.

Just days before departure for months of pre-paid dive charter work in New Guinea, a suspicious explosion occurred in the sealed engine room which sent Coralita to the bottom of Cairns Harbour in seconds.

Alby was cleared of involvement in the accident after two investigations – although waterfront rumors always blame any maritime accident on the owner.  What can now be revealed (in 2020) was a serious verbal threat from a competitor hours before the accident.

Construction for a newer and bigger vessel were 90% complete but another financial disaster occurred when the builder declared bankruptcy before completion.  (Not uncommon in boat building where new project finances are required to finish existing orders).

Alby then turned his talents to angling and soon became an authority with a weekly radio slot and many new fishing friends. Anglers comprised 95% of the vast crowd who attended his funeral. Alby died from a heart attack in a remote region while returning from a fishing trip up the coast with his mates.

This blog is a combination of: 1. Polynesian atolls 'people of the sea' (1969) 2. Australian surfing and spear fishing 1960s 3. Underwater photography and film making CONTENTS are mixed. Use 'categories' 'search' or scroll through. In time more text will be added to existing posts. (REFRESH your browser). Enjoy the contents, tell friends. View all posts by thejohnharding3

This site uses Akismet to reduce spam. Learn how your comment data is processed.