Also called mako this is the blue water cousin of the white pointer shark.

A spectacular shark when hooked – a very dangerous one too. They’ll spin head over tail in the air; smash through the hull of a boat (when heading for the surface); or crash aboard a boat during their final jump. A serious problem indeed.

The line and wire trace leading to the hood can easily become as lethal as a knife during the final moment before the shark is tagged and released, or gaffed.

This is an Australian record, captured by Odile Foster while fishing off the NSW south coast village of Bermagui – a location made famous in the 1930’s by big game fishermen from USA – and the legend lasts today with many small boats heading offshore to Montague Island during the holidays.

To Eat: The blue pointer is popular as a boneless fish fillet and sells well.

Woolworths at Burleigh Heads, Gold Coast of Queensland says it is their biggest selling fresh fish.

Probably with the heavy metal mercury and therefore not a good choice for food, as are marlin, swordfish and other sharks. I wouldn’t touch any of them.

In Japan this shark is ground into a paste and washed several times before being flavored and eventually eaten as  surimi.

Still a rarely photographed shark underwater. Only small versions seem to have been photographed. The most spectacular shark of all, especially when a large specimen is involved.

An oceanic blue water pelagic which most scuba divers inshore in shallow water will not encounter.

Teeth.  More similar to those of a Grey Nurse shark – being longer and pointed, like fingers, whereas the cousin White Pointer (often called  Great White shark by Hollywood and media non professionals) has large triangular teeth in the upper jaw and narrower triangular versions below. 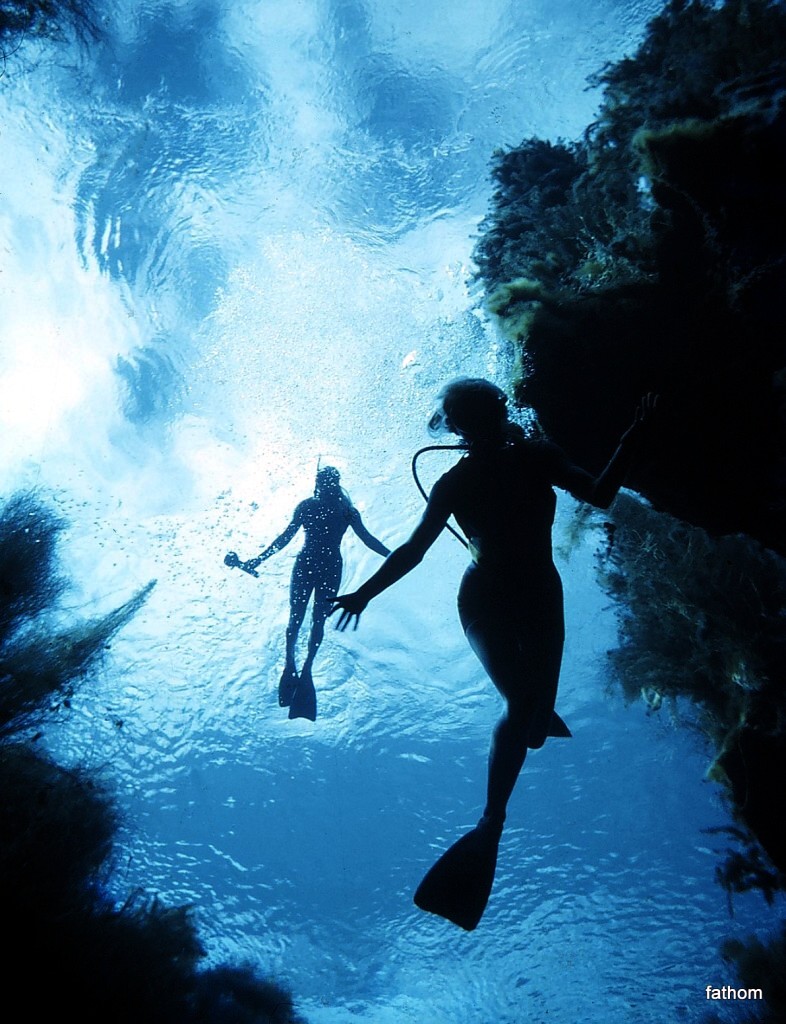 Valerie Taylor descending into Picaninnie Ponds. One of the first 35mm stills to win an International Photo Comp in the sixties.

Ron Taylor stopped off at these ponds while returning from a Kangaroo Island (SA) spearfishing championship in January 1964 and did brilliant pictures with his bride, Valerie, (diving without a wetsuit in the cold crystal clear springs).

And so began several years of photography and filming in the region where numerous limestone caves and sink holes offered a new world of underwater adventure.

In 1966 a 16mm uw documentary “The Cave Divers” was sponsored by  WD & HO Wills for free loan from their library. It shows many uw photogenic dives possible in the Mt Gambier area of South Australia. The Pines, Hell’s Hole, Ewen Ponds, Picaninnie Ponds, The Shaft.

The next year a tobacco company, Rothmans, commissioned a 35mm theater commercial (based on the content of that first Ron Taylor documentary) titled The Hands of Man. It was to re-create discoveries made in underground water-filled springs at The Pines– where the high-calcium content water was preserving bones of extinct species of kangaroo.

The same uw team was hired along with an above water crew of more than thirty film production people. It was a BIG project over several days with truck-loads of gear from Sydney.

But the expensive production never saw the light of day. Axed before completion. The fickle world of advertising.

In the following years several tragedies occurred, in one terrible example three young divers (two from the same Sydney family) were lost in the infamous location The Shaft. More about this location eventually. It is also known as The Allendale Hole.